Pancreatic cancer has a poor prognosis, with up to 90% of cancers diagnosed as locally advanced/unresectable due to vascular invasion involving the portal vein (PV), superior mesenteric vein (SMV), and superior mesenteric artery (SMA) (1). For the 10–15% of patients that are deemed resectable, a pancreaticoduodenectomy (PD) is the only effective treatment for tumors involving the head of the pancreas. The traditional approach to a PD involves confirming resectability based on vascular involvement early in the operation. Arterial involvement of the SMA is considered a contraindication for surgical resection; however, intraoperative identification of SMA involvement typically occurs once there is a commitment to proceeding with a PD when utilizing a traditional approach. A modification of the traditional approach has been proposed for resection of borderline resectable tumors when there is concern for possible SMA involvement. Termed the “SMA first approach”, the aim is to facilitate early recognition of unresectability to avoid a potential microscopic/macroscopically incomplete (R1/R2) resection (2).

This case presents a new modification to PD, using a posterior artery first approach en bloc with SMV resection for a large pancreatic head adenocarcinoma with an occluded SMV and suspected SMA involvement.

A 66-year-old female with history of hypertension and hyperlipidemia presented to clinic with a 6 months history of generalized abdominal pain and unintentional 10 pounds weight loss, jaundice and dark urine. Her workup included a CT scan of her abdomen that revealed an ill-defined hypodense mass measuring 3.6 cm in the head of the pancreas (Figure 1). Additionally, she was found to have moderate intrahepatic biliary ductal dilation and pancreatic duct dilation to 7 mm. A CT angiogram demonstrated that the mass appeared adjacent to the SMA and the SMV was occluded over a length of 2.2 cm that began immediately inferior to the inferior mesenteric vein insertion. She had no evidence of metastatic disease. Of note, her proper hepatic artery arose from the SMA and she had an accessory left hepatic artery arising from the left gastric artery. Her CA 19-9 was 2,361. An endoscopic ultrasound was performed that confirmed these findings and subsequent fine-needle aspiration yielded adenocarcinoma. 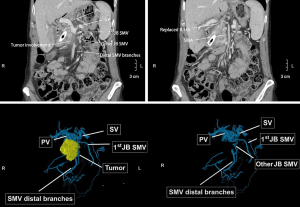 Figure 1 An ill-defined hypodense mass measuring 3.6 cm was found in the head of the pancreas (images and 3D reconstruction images).

She subsequently had a bare metal biliary stent placed endoscopically prior to receiving eight cycles of neoadjuvant chemotherapy (4 FOLFIRINOX + 4 FOLFOX regimen) followed by 54 Gy of intensity-modulated radiation therapy with concurrent capecitabine. She tolerated her treatment well but she did develop a right calf deep vein thrombosis requiring systemic anticoagulation. Post-treatment imaging showed an overall decrease in burden of disease; however, the involvement of the SMV did persist. In light of her response to neoadjuvant treatment, and her overall good performance status, the decision was made to proceed to the operating room for PD.

Following a midline laparotomy incision, initial exploration showed no visible metastatic disease, so the decision was made to proceed with a PD. After performing a cholecystectomy, the peritoneum medial to the line of Toldt was dissected followed by medialization of the descending colon, splenic flexure, and transverse colon. The small bowel mesentery was dissected cephalad along the IMV. The attachments between duodenum to retroperitoneum and transverse colon were taken down, exposing the IVC and left renal vein.

The ligament of Treitz was dissected to fully mobilize the mesentery, facilitating dissection of the suprarenal vein space. The root of the SMA was then isolated with a vessel loop (Figure 2). Careful dissection along the SMA revealed soft tissue with no gross invasion into the SMA, consistent with preoperative imaging. 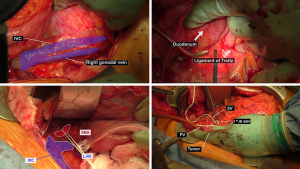 Figure 2 The line of Toldt was dissected until to duodenum and ligament of Treitz using Cattell-Braasch maneuver, exposed the IVC, L.RV, and then isolated SMA with a vessel loop. A tunnel was created between the pancreas and the confluence of PV, splenic vein and first jejunal branch of the SMV, transected the pancreatic neck after confirming resectability of the tumor.

The soft tissue around the porta hepatis was dissected carefully to facilitate exposure. The replaced left hepatic artery off the left gastric artery and replaced right hepatic artery originating from the SMA were preserved. The gastroduodenal artery (GDA) branching from the celiac artery was identified and ligated at the superior edge of the pancreas. The common bile duct was isolated, and the PV and splenic vein confluence were identified free of tumor. The greater omentum was transected, entering the lesser sac and the SMV was exposed at the inferior border of pancreatic neck.

A tunnel was created between the pancreas and the confluence of PV, splenic vein and first jejunal branch of the SMV, through which a Penrose drain was passed to suspend the pancreatic neck. The SMA was dissected distally free from pancreas, confirming resectability of the tumor.

The common hepatic duct was transected above the entrance of the cystic duct and the margin was sent for frozen. The pancreatic neck was then transected and also sent for frozen. A vascular clamp was placed distal to the confluence of the PV, splenic vein and the first jejunal branch of the SMV, maintaining collateral flow to the PV. Another vascular clamp was applied to the main SMV branch at the root of mesentery (Figure 3). The SMV was resected both proximally and distally to the clamps and removed en bloc.

Figure 3 A vascular clamp was placed distal to the confluence of the PV, splenic vein and the first jejunal branch of the SMV. Another vascular clamp was applied to the main SMV branch at the root of mesentery. The SMV was resected both proximally and distally to the clamps and removed en bloc.

The SMV reconstruction was performed by way of an SMV to PV interposition graft using reversed saphenous vein. After administering 3,000 units of intravenous heparin, the anastomosis was performed in an end-to-end fashion (Figure 4). Venous flow was restored and continuous flow was confirmed via Doppler. 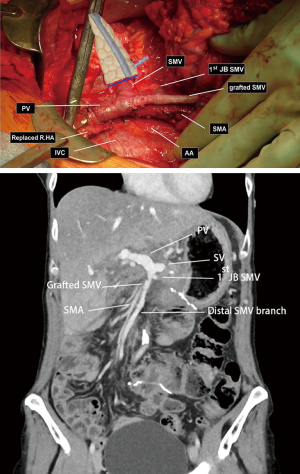 Figure 4 The SMV reconstruction was performed in an end-to-end fashion by way of an SMV to PV interposition graft using reversed saphenous vein.

Final pathologic review of the specimen demonstrated a 3.2 cm poorly differentiated ductal adenocarcinoma with minimal treatment effect. On gross review of the specimen, the uncinate process was completely retained, in contrast to typical PD specimens where the uncinate margin is transected due to the proximity of the SMA/SMV. The tumor was located in the pancreatic head and uncinate process and invaded the peripancreatic soft tissue and the SMV. The pancreatic parenchymal, uncinate, common bile duct, posterior pancreatic surface, anterior soft tissue, proximal gastric and distal duodenal resection margins were negative for tumor. No lymphovascular invasion or perineural invasion was identified. One of 16 lymph nodes was positive for a final stage AJCC 7th edition of T3N1.

The surgical technique for resection of pancreatic cancer has evolved over the past few decades to allow for treatment of previously termed “unresectable” disease. The definition of borderline resectable pancreatic tumors allows for extension of tumor into the GDA, encasement of the hepatic artery without extension into the celiac trunk, and allows for tumor abutment of the SMA that cannot exceed 180 degrees circumference of the vessel wall (3). Any involvement beyond this is deemed “unresectable”.

Pessaux et al. first described a novel posterior approach to the SMA in 2006 (2), which is now classified as “artery first approach” technique. This approach has been recommended mainly in the setting of borderline resectable tumors in order to determine whether the tumor involves the SMA and can be resected prior to dividing the neck of the pancreas, at which point the procedure must be completed. This is the current standard of care for patients with borderline resectable pancreatic tumors (4).

The posterior “artery first approach” has been shown to have decreased morbidity (5) and blood loss (6) compared to anterior artery first approach. Several studies have shown additional benefits of increased negative resection margin rates (7), decreased local-regional recurrence rates (5), and increased survival rates (8) after posterior approach PD. Although posterior approach PD has become the standard of care in some surgical centers, a selective use appears to be more appropriate. The attached video clip illustrated the detail surgical techniques in the stepwise fashion (Figure 5). 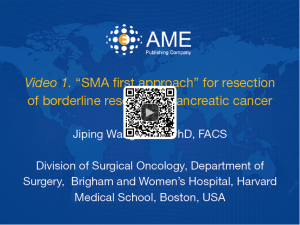 The authors would like to thank Dr. Charles Keith Ozaki and his team for the SMV reconstruction.