Gastric cancer has a peak incidence between 50 and 70 years of age, and has demonstrated a rising incidence in the elderly as life expectancies have increased (1-4). Current treatment guidelines and the standard of care are commonly based on studies and clinical trials of younger patients and need to be assessed for their direct applicability to the elderly population, both in the context of their increased comorbidities as well as potential differences in their disease pathophysiology (1,5,6). This manuscript examines the current state of scientific knowledge in the management of gastric cancer and presents the evidence from the National Cancer Database (NCDB), with a special focus on the important variations and considerations that need to be made for elderly patients.

The elderly and gastric cancer

Currently, there is no standard definition of “elderly”. Many groups and organizations, including the World Health Organization, have used a chronological age of 65 years and older to define the elderly population; however, as the average life expectancy in many countries are reaching, and at times exceeding, 80 years of age, this definition is rapidly shifting (31,32). As a result, there are also no standard guidelines for the management and treatment of the elderly with gastric cancer.

Several differences have been identified in the presentation and pathologic characteristics of gastric cancer when diagnosed in the elderly compared with younger patients. As expected, elderly patients typically have more medical comorbidities and higher American Society of Anesthesiologists (ASA) classification scores (33-35). Elderly patients also tend to present with symptomatic disease of more advanced clinical stage (33,36,37). The primary tumors tend to be found in the distal third of the stomach (38-41). Histopathologically, elderly patients tend to have tumors that occur in multiples, of larger size, and of well-differentiated and intestinal-type histology (1,33,36,38,42-46). Several studies have also identified potentially different patterns of lymph node metastases in elderly gastric cancer patients compared with younger patients; however, the results are conflicting as some studies have demonstrated a higher propensity of lymph node metastases in the elderly, some have shown a lower propensity, and others have shown no difference (1,33,38,41,42,47-50). The interpretation of these varying findings remains difficult as the elderly often undergo a limited lymphadenectomy compared to the extended D2 lymphadenectomy which is the standard of care among younger patients. We examined 13,836 patients who underwent radical gastrectomy between 2010 and 2014 using NCDB, of which 2,140 patients (15%) were aged ≥80 years. Patients age older than 80 tended to have larger tumors and more lymph node involvement, hence with higher American Joint Committee on Cancer (AJCC) stages compared to younger patients (P<0.0001). These observations are consistent with previous reports.

Surgery in the elderly

The extent of resection is determined by the primary tumor stage and nodal status. The AJCC TNM classification is one of the most commonly used staging criteria (51). T1a tumors, defined by invasion of the lamina propria or muscularis mucosa, are typically amenable to endoscopic resection. For stage IB–III disease with a primary tumor that that invades into and beyond the submucosa but does not violate the visceral peritoneum or adjacent structures, a partial gastrectomy with extended D2 lymphadenectomy is recommended to achieve a curative resection of all microscopic and macroscopic disease (52).

As gastrectomy is a significant abdominal operation, elderly patients must be carefully evaluated preoperatively given their increased risk of morbidity and mortality with surgery. Fujiwara et al. compared 115 patients aged ≥80 years with 333 patients aged ≤79 years, who underwent subtotal or total gastrectomy with varying extent of lymphadenectomy, and found that patients aged ≥80 years had more post-operative complications and in-hospital mortality, as well as lower overall survival (OS) and disease-specific survival (DSS) (53). Using a time-dependent receiver operating characteristic curve analysis, the optimum age cut-off identified in this study for gastrectomy to produce a survival benefit at three years was 79.2 years. Hsu et al. evaluated the outcomes of 164 patients ≥80 years who underwent subtotal or total gastrectomy with D2 lymphadenectomy in comparison with 2,258 younger patients <80 years and also identified a significantly higher morbidity (18% vs. 13%, P=0.035) and in-hospital mortality rate (7% vs. 3%, P=0.015) in the elderly group (35). However, unlike the previous study, Hsu et al. did not identify any significant differences in long-term disease-specific deaths (44% vs. 47%, P=0.407) after a median follow-up of 37.8 months. Applying an even higher age cut-off to define the elderly population, Endo et al. compared 56 patients ≥85 years old who underwent distal gastrectomy with 55 patients <85 years old who received best supportive care only using propensity score-matched analysis (54). A survival benefit of gastrectomy over best supportive care in this most elderly group was demonstrated among female patients only (median OS 67 vs. 12 months, P<0.0001), but not in male patients (median OS 13 vs. 18 months, P=0.037). Post-operative pneumonia, especially among male patients, was a common complication in this study population and was often associated with mortality, which has also been reported in other studies (42,53,55-58). The gender-based survival difference in patients with post-operative pneumonia has also been identified in other elderly and highly comorbid patient populations, and is potentially a result of interactions between various hormonal, immunologic, and microbiologic factors (59-63). The overall high incidence of post-operative pneumonia in the elderly is likely due to the baseline decreased pulmonary function and reserve, which is then further diminished after a major open abdominal surgery (64-69). Non-pulmonary post-operative complications as well as post-operative death after gastrectomy have also demonstrated increasing incidence with increased patient age (34,45,70-72). These studies indicate the importance of pre-operative risk assessment and patient selection among elderly patients being considered for open gastrectomy.

The extent of lymphadenectomy during gastrectomy and the potential survival benefit of extended D2 lymphadenectomy in elderly patients has also been controversial. While D2 lymphadenectomy, which includes nodes along the left gastric, common hepatic, celiac, and splenic arteries in addition to the perigastric lymph nodes removed in D1 lymphadenectomy, is typically recommended for stage IB–III gastric cancers, the oncologic benefit must be balanced with the potentially increased morbidity and mortality of this more extensive procedure in an elderly population with more medical co-morbidities and less functional reserve. Brenkman et al. reviewed 2,387 patients <75 years of age and 1,377 patients ≥75 years who had undergone curative subtotal or total gastrectomy and found that a high lymph node yield improved survival in both age groups, with no increase in postoperative mortality (43). However, the difficulty in interpreting this and similar studies lies in the use of lymph node yield as a measure of the extent of lymphadenectomy. Lymph node yield only records the number of lymph nodes harvested intra-operatively, but may not always accurately convey if nodes were sufficiently taken from all the necessary stations that define a D2 lymphadenectomy. In the Dutch trial of 1,078 patients who were randomized to D1 or D2 lymphadenectomy, patients >70 years consistently had higher morbidity and mortality compared to patients ≤70 years, and these rates were even higher among those >70 years who underwent D2 compared to D1 lymphadenectomy, with limited survival benefit (84). Rausei et al. reviewed 1,322 patients who had undergone curative gastrectomy with D2 versus D1 lymphadenectomy and, in addition, to categorizing patients by age (<70 versus >70 years), also stratified patients by their comorbidities using the Charlson comorbidity score (<5 vs. >5) (85). Overall, more post-operative complications occurred in patients >70 years (34% vs. 28%, P<0.001), and within this elderly population, those with high Charlson scores had an even higher complication rates (38% vs. 31%, P=0.007). Patients >70 years with high Charlson scores also trended towards having more complications after D2 lymphadenectomy, but this was not statistically significant (40% vs. 35%). Additional studies have also demonstrated the lack of survival benefit conferred by extended D2 lymphadenectomy compared to a more limited D1 lymphadenectomy in elderly patients (46,86-88) (Table 1). Our study from the NCDB suggested that elderly patients might not derive the same survival benefit from D2 lymph node dissection as younger patients. Of the 2,140 patients aged ≥80 years who underwent subtotal or total gastrectomy, half had less than 15 lymph nodes examined and half had 15 or more lymph nodes examined. Using this as a proxy for extent of lymph node dissection, there was no difference in OS between the elderly patients who had a limited compared to extensive lymphadenectomy (median OS 18.2 vs. 19.2 months, P=0.29). 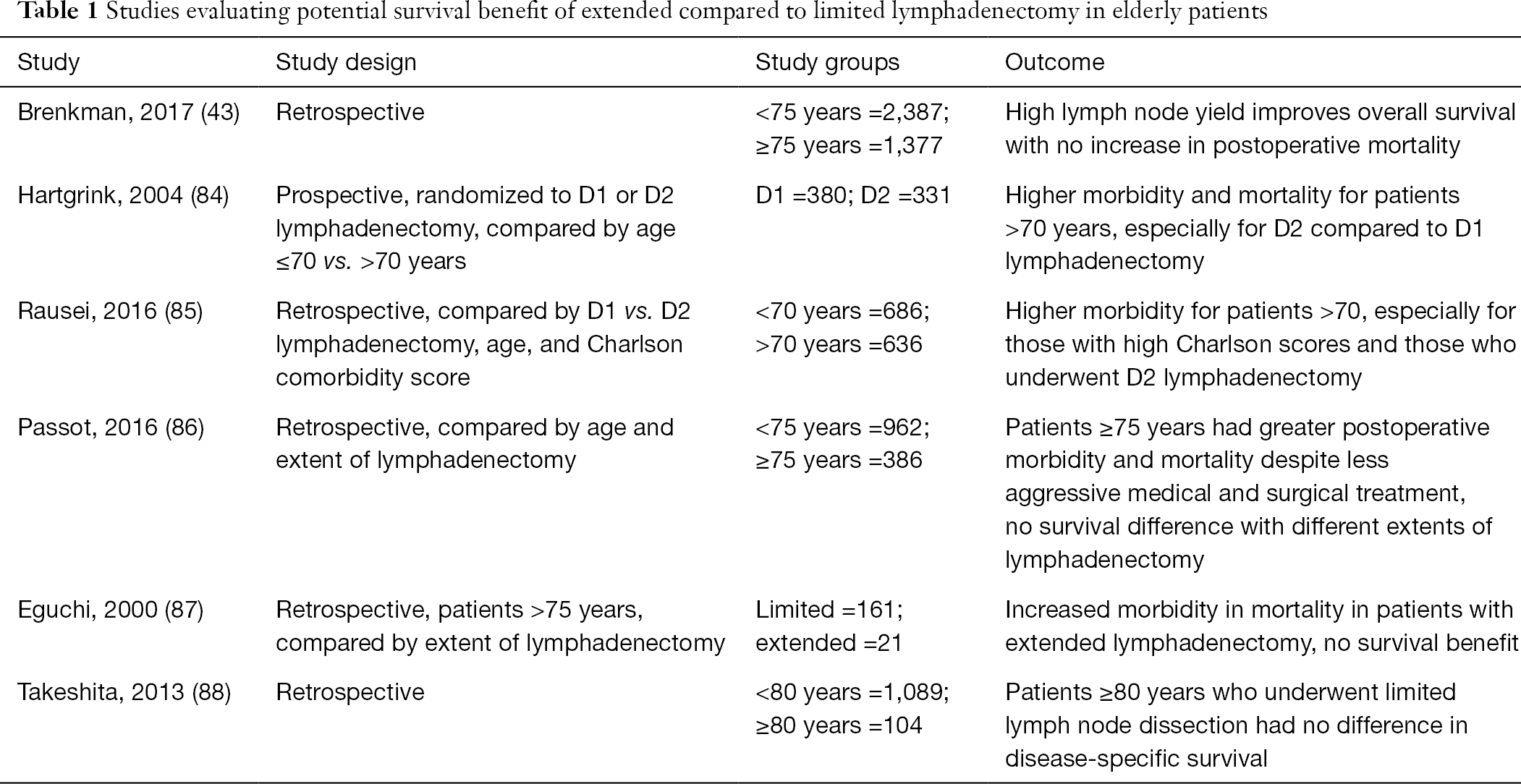 Neoadjuvant therapy for the elderly

For patients with ≥T1b tumors, neoadjuvant chemotherapy with a platinum/fluoropyrimidine combination is recommended (52). The MAGIC trial demonstrated a significant improvement in both overall (5-year 36% vs. 23%) and progression-free survival (PFS) (HR 0.66; 95% CI: 0.53–0.81) for patients with resectable gastric cancer treated with three cycles of pre-operative and three cycles of post-operative epirubicin, cisplatin, and fluorouracil compared to those who underwent surgery alone (89). Additional trials have supported the survival benefit of this neoadjuvant chemotherapy combination in patients with resectable gastric cancer (90,91). However, many the patients in these trials were young or middle-aged, with a limited number of elderly patients, especially those ≥80 years. Trials focusing specifically on elderly patients have demonstrated an oncologic benefit with neoadjuvant chemotherapy but at the expense of increased toxicities and decreased quality of life (92,93).

The role of neoadjuvant chemoradiation remains unclear and remains an active area of investigation (94-97). Additional studies will be needed to determine if the potential benefits are also applicable to the elderly population. Our investigation of the NCDB showed that among all the elderly patients who underwent radical gastrectomy, only 7.5% received neoadjuvant chemo/radiation therapy, whereas the proportion is much higher in other age groups (44.5% for patients <65 years and 33.6% for patients aged 65–79 years, P<0.001).

Adjuvant therapy for the elderly

Table 2 presents a review of chemotherapy, radiation, and chemoradiation trials and studies comprising gastric cancer patients of all ages. Table 3 summarizes trials and studies that focused specifically on the treatment of elderly patients. 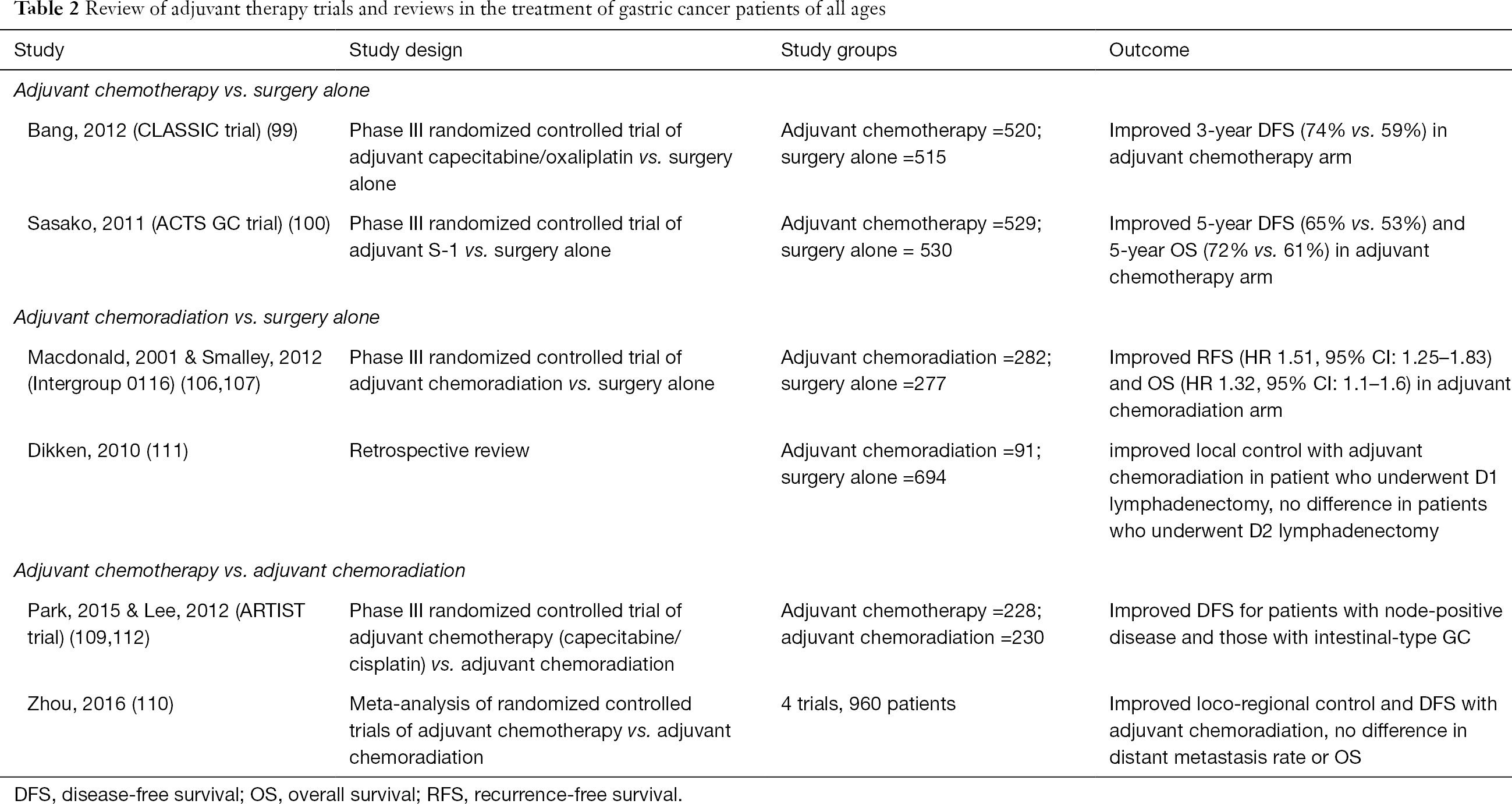 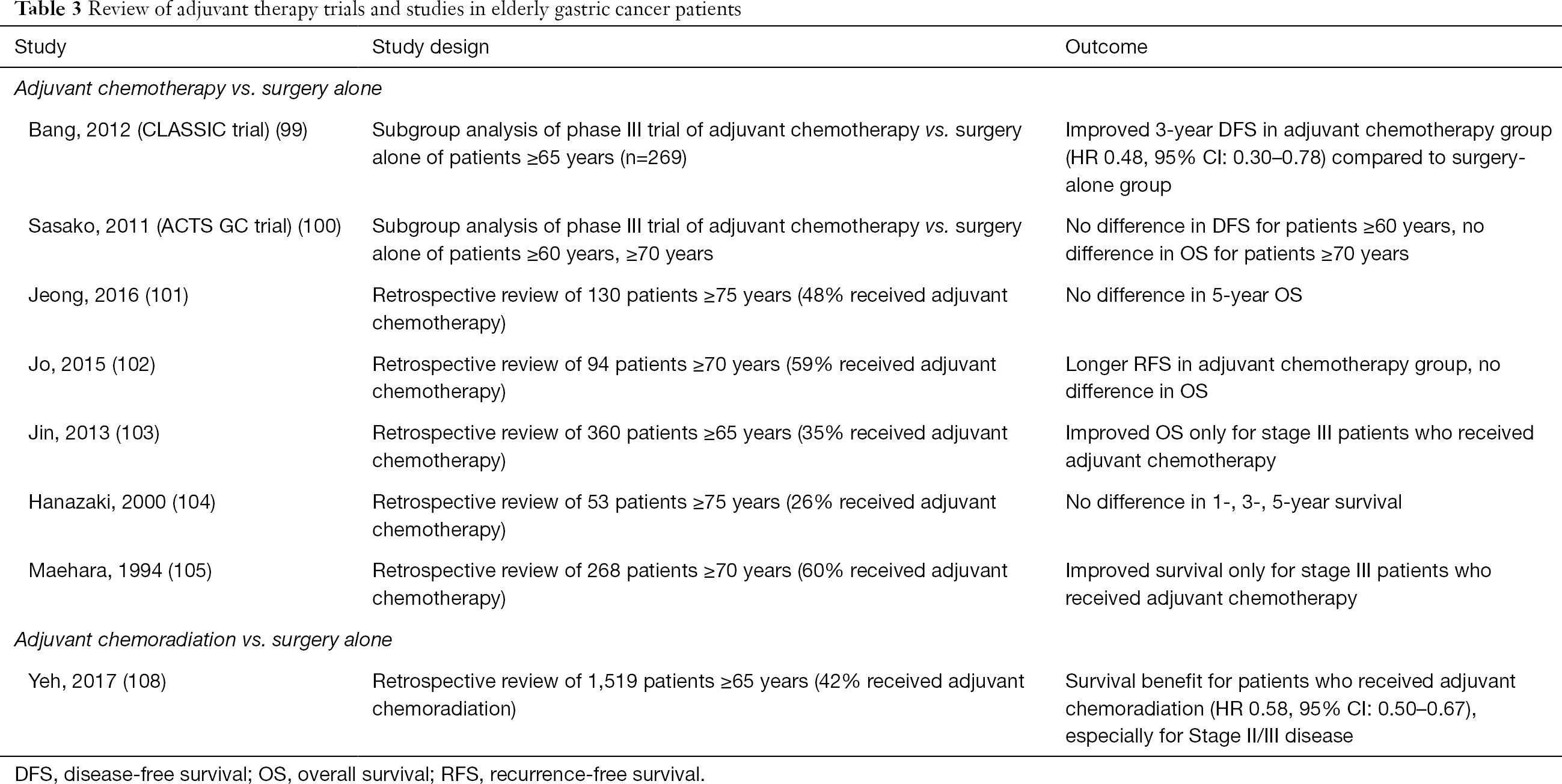 Treatment of metastatic disease for the elderly

In the setting of metastatic disease, combination therapy with platinum and fluoropyrimidines is recommended. In a multi-center phase III trial of 50 patients ≥70 years with metastatic cancer, double therapy with oxaliplatin and capecitabine improved both PFS and OS compared to monotherapy with capecitabine (PFS 7.1 vs. 2.6 months, OS 11.1 vs. 6.3 months) (113). This is comparable to the median OS times reported in phase III trials comprised of patients of all ages with metastatic gastric cancer (114-116). Sasaki et al. reported in a phase II trial that combination cisplatin and S-1, an oral fluoropyrimidine, was also safe and effective for elderly patients ≥76 years, with median PFS and OS of 7.8 and 12.3 months, respectively (117). In a sub-group analysis of patients ≥70 years who were enrolled in the Japanese randomized phase III G-SOX comparing S-1 and oxaliplatin with S-1 and cisplatin therapy, there were no differences in PFS or OS between the two combination regimens but elderly patients receiving S-1 and oxaliplatin experienced fewer toxicities (118). A retrospective review of 129 patients ≥65 years with metastatic or recurrent gastric cancer also showed that combination S-1 and oxaliplatin was well-tolerated in this older age group (119) (Table 4).