This is a 76-year-old female who presented with acute epigastric and right upper quadrant pain. The pain was described as sharp, stabbing in nature and typically occurred about an hour after dinner. She underwent a computed tomography (CT) scan of the abdomen and pelvis at an outside hospital that revealed a large gallbladder mass concerning for malignancy. Her laboratory examination at the outside hospital demonstrated normal liver function and bilirubin. She was subsequently transferred to the Brigham and Women’s Hospital for further evaluation.

Results from diagnosis and staging workup: the patient underwent a fine-needle aspiration biopsy of the mass which was confirmed to be adenocarcinoma (CK7 positive, CDX2 focal, CK2 negative). 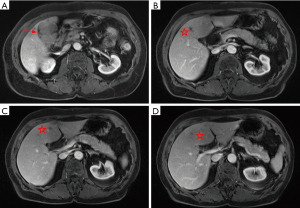 PET/CT showed a 7.5 cm × 5.2 cm FDG-avid (SUVmax of 9.9) mass with central photopenia centered in the area of the gallbladder. FDG-avid hypodense lesions abutting the primary mass within the inferior margin of the right lobe of the liver raised concern for hepatic invasion. There were no FDG avid lymph nodes or signs of distant metastasis (Figure 2). The CA 19-9 tumor marker was 15. 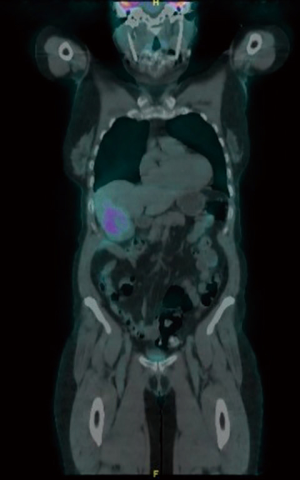 The patient was discharged home and followed up at the Dana Farber Cancer Institute Gastrointestinal Cancer Center.

Question 1: How should we treat this otherwise healthy patient?

This patient has a locally advanced gallbladder cancer with no evidence of distant metastatic disease. There is evidence of discrete skip lesions contained within segment IVb of the right liver that are consistent with regional metastases. All the disease is resectable from a surgical technique standpoint; however, the presence of liver metastasis makes this stage IVB disease with a 5-year overall survival rate of 2% (1). Nevertheless, given her otherwise good health status, we decided the most appropriate approach is to give her chemotherapy which serves two purposes: (I) to facilitate resection if the tumor responds, and (II) as a test of time in order to understand the tumor’s biological behavior. If the patient develops new lesions or the tumor progresses during this period of time, then we would know that we should not have performed the surgery to begin with. If her disease is stable or the tumor responds to chemotherapy, then we can re-evaluate the surgical options.

The chance of occult metastatic disease is very high in this setting and upfront surgery can be associated with significant morbidity. The randomized phase III ABC-02 study established the combination of gemcitabine and cisplatin as the standard first-line regimen for locally advanced unresectable and metastatic gallbladder adenocarcinoma (median overall survival 11.7 vs. 8.1 months, combination vs. gemcitabine-alone, respectively, P<0.001) (2). The patient’s good performance status, absence of renal failure or neurologic symptoms made her a good candidate for this regimen.

This patient has a locally advanced gallbladder cancer with liver metastases. The current treatment options based on guidelines from the National Comprehensive Cancer Network are non-surgical management with gemcitabine/cisplatin (Category 1 recommendation), other gemcitabine- or fluoropyrimidine-based chemotherapy or enrollment into a clinical trial (3). There are no data from randomized control trials to guide us in her specific situation given her good functional status and limited disease burden. We decided to proceed with upfront systemic chemotherapy for metastatic gallbladder adenocarcinoma. Given the limited extent of disease, we planned to re-stage the patient after 2–3 months of systemic therapy. If at that time there are no additional sites of disease, a radical cholecystectomy with 4B liver dissection would be considered based on outcomes reported from retrospective studies (4-7). 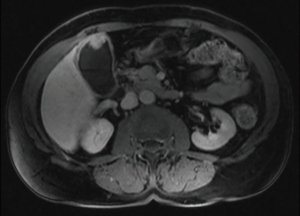 The patient underwent a radical cholecystectomy with central hepatectomy and porta hepatis lymph node dissection. Final pathology demonstrated a 2.5 cm moderately differentiated adenocarcinoma involving the fundus of the gallbladder. The tumor invaded through the muscular layer into the perimuscular connective tissue and was associated with high grade dysplasia. No lymphovascular or perineural invasion was identified. The liver parenchyma demonstrated an area with focal fibrosis and hemosiderin-laden macrophages and was negative for tumor. All resection margins were negative for tumor. The American Joint Committee on Cancer (7th edition) classification was ypT2 N0 (Figure 4A,B).

Question 2: What is the next step in managing this patient with T2N0 gallbladder cancer (after 2 cycles of neoadjuvant chemotherapy)

The patient received an additional 6 cycles of gemcitabine and cisplatin and tolerated the treatment well. The patient now has no evidence of disease recurrence 20 months after the diagnosis and 16 months from the date of surgery.

Gallbladder cancer is a rare malignancy that most commonly presents with metastatic disease at the time of initial diagnosis (8). As a result, the overall prognosis of these patients can be quite dismal. A macroscopically complete surgical resection with negative microscopic margins remains the only curative treatment for patients with gallbladder cancer. In general, patients with advanced stage gallbladder cancer with evidence of distant spread to the peritoneum, abdominal lymph nodes, or the liver were not thought to derive any benefit from aggressive surgery. The dilemma of how to manage these patients is becoming more prevalent as systemic therapeutic regimens improve. The results of the ABC-02 phase III trial established combination therapy with gemcitabine and cisplatin as the standard of care for locally advanced and metastatic gallbladder cancer. Tumor control rates in this trial were reported to be 81.4%, while a complete response was seen in only one out of 200 patients. Response to upfront systemic therapy could potentially select out a group of patients that may benefit from an aggressive surgery approach in the setting of regionally metastatic disease. A retrospective review from South Korea demonstrated two long-term survivors, one with a single segment V metastasis and one with three peritoneal nodules that were alive and disease-free at 109 and 57 months, respectively (5). Further investigation of the role of surgery in stage IV gallbladder cancer is required but it is clear that very carefully selected patients may benefit from an aggressive surgery approach following upfront systemic chemotherapy.