Adrenal cortical carcinoma (ACC) is a rare malignancy with an annual incidence of approximately 0.7 cases per million in the United States (1). While these tumors can develop at any age, there is a recognized bimodal age distribution for ACC with the first peak occurring before age 5 years and the second peak in the 4th–5th decade of life (2). Despite accounting for only 0.2% of cancer-related deaths per year in the United States, ACC has a very poor prognosis (3). Over half of patients present with advanced disease and overall survival remains poor even with surgical resection (4,5). Management of ACC requires a multidisciplinary treatment approach. Surgical resection offers the only potentially curative treatment option even though recurrences will still occur in up to 70–80% (6,7). Age older than 55 years, positive resection margin, lymph node positive disease, resection of a contiguous organ, poorly-differentiated tumors, and distant metastatic disease are independent predictors of worse prognosis in patients who undergo surgical resection (4). Due to the proximity of the adrenal gland to surrounding anatomic structures, the need for combined resection ACC with liver, pancreas, kidney are common. Hence, surgical resection of ACC carries significant mortality and morbidity.

This case presents the strategic planning for surgical resection of a large right ACC with liver metastasis.

A 68-year-old male with history of severe gastroesophageal reflux s/p laparoscopic Nissen fundoplication first presented to his primary care physician with a 3-week history of right-sided back pain. He continued to have flares of pain with associated anorexia and nausea despite the use of non-steroidal anti-inflammatory medications. To rule out a potential biliary tract etiology, a right upper quadrant ultrasound was obtained that demonstrated a 10.6×10.3×7.0 cm mass between the upper pole of the right kidney and the liver. A subsequent computed tomography (CT) scan showed an 11.5×9.1 cm soft tissue density that appeared to involve the right adrenal gland with local extension into the liver and anteriorly displaced the inferior vena cava and circumferentially involved the right renal vessels (Figure 1). Additionally, multiple hypodense lesions were present in the right lobe of the liver and there were several enlarged retrocrural, para-aortic, and paracaval lymph nodes. A CT-guided biopsy of the main tumor mass was obtained that demonstrated ACC with 18 mitoses per 20 high power field (HPF). His biochemical workup was remarkable only for an AM cortisol that did not suppress following administration of dexamethasone. Staging workup included a chest CT that did not show any additional lesions aside from enlarged lymph nodes adjacent to the distal esophagus and a [18F] fluoro-2-deoxy-D-glucose positron emission tomography (PET) scan that confirmed the extent of disease noted on the abdominal CT scan in addition to an azygoesophageal node that was PET-avid. 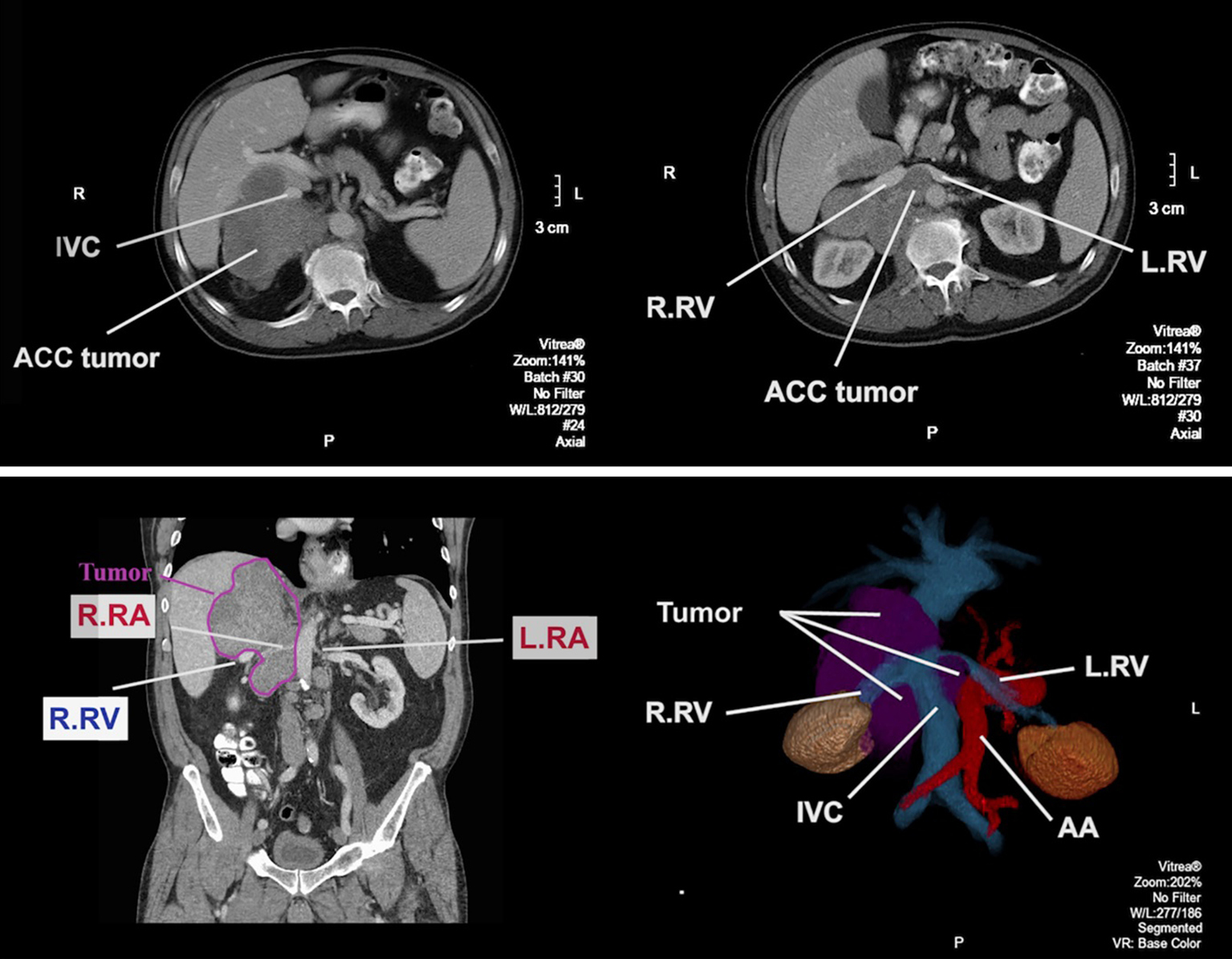 Following a multidisciplinary evaluation, it was recommended that in the setting of such a significant burden of disease, that upfront chemotherapy would likely have little effect. Due to significant symptoms from the tumor burden, in a patient with an otherwise excellent performance status, the decision was made to proceed with surgical debulking followed by adjuvant chemotherapy. 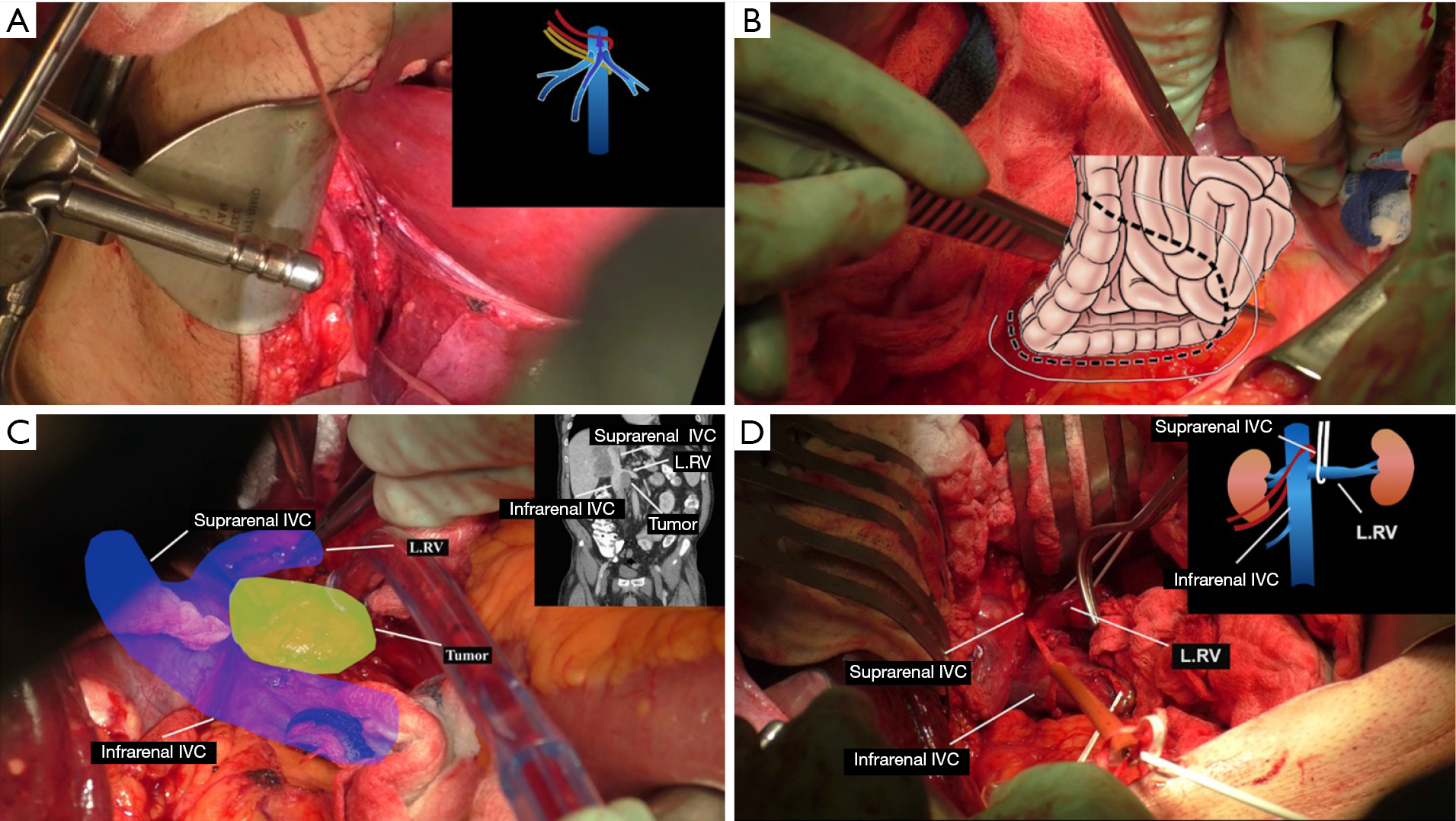 If venovenous bypass would be required, this would allow isolation of the inferior vena cava without compromising the venous outflow from the remnant left liver.

A Cattell-Braasch maneuver (Figure 3B) was performed by mobilizing the right colon, duodenum, and the head of the pancreas medially in order to expose the infrahepatic inferior vena cava (Figure 3C,D). Based on the preoperative imaging demonstrating encasement of the right renal vessels, a key decision point in the operation was whether the left renal vessels were involved. The tumor extended posterior to the left renal vein, however, there was no evidence of direct invasion and the vessel was safely mobilized off of the tumor. The right renal vein was then divided. The right side of infrahepatic inferior vena cava was dissected away from the anterior surface of the tumor and a tourniquet was placed around the inferior vena cava just cephalad to the left renal vein. 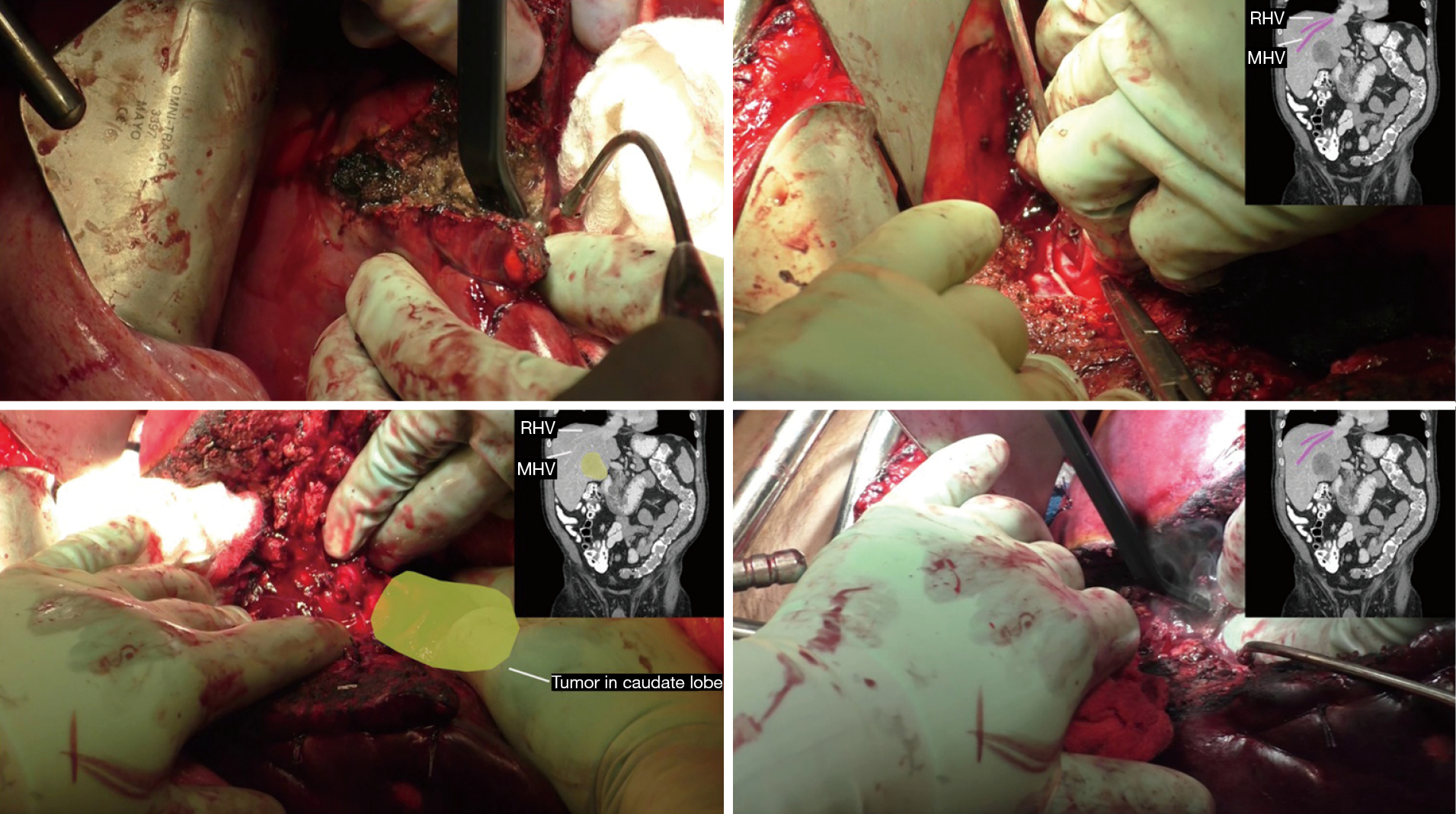 A cholecystectomy was performed and the porta hepatis structures were dissected and identified. The right portal vein was identified and the posterior branch was identified and divided while the anterior branch was preserved along with a large portion of segment 5 and 8 in order to maximize the remaining liver remnant due to tumor involvement of the left lobe. Guided by the line of demarcation, the liver parenchyma was then divided using a combination of crushing and ties. Once the liver was divided down to the level of the inferior vena cava, the dissection was carried along the anterior aspect of the vein in order to separate it from the tumor. The right lobe of the liver along with caudate lobe was removed. The tumor was then mobilized laterally and posteriorly off the retroperitoneum. The right renal artery and ureter were then divided and the tumor was separated from its remaining attachments and removed en bloc with right kidney.

Multiple lymph nodes extending along the inferior vena cava and mesenteric vessels were removed. A 19-French blake drain was placed in the right upper quadrant and the abdomen was closed.

Final pathologic review of the specimen demonstrated a 12.2-cm ACC with 143 mitoses per 50 HPFs. The tumor focally invaded adjacent adipose tissue as well as the liver parenchyma with multiple tumor nodules ranging from 0.2 to 16.5 cm throughout the liver specimen. The hepatic resection margin was negative for tumor. Metastatic ACC involved a matted aggregate of lymph nodes 12.0 cm in size. The final stage American Joint Committee on Cancer (AJCC) 7th edition was T4N1.

ACC is a rare tumor that can present unique clinical and technical challenges. Data regarding the role of surgery in patients with metastatic ACC is primarily retrospective and inherently flawed by selection bias. Surgical resection may provide a survival benefit in a select group of patients with metastatic disease, however, further prospective data is needed (8). Due to the anatomic location, ACC resection is a complex procedure and requires careful preoperative evaluation and detail planning. This video presented a large right ACC involves right lobe of the liver, caudate lobe, inferior vena cava (IVC), aorta, right kidney and paravertebral tissue (Figure 5). We proposed detail plans including: preparation for veno-veno bypass, anterior approach for liver resection, complete or partial hepatic vascular exclusion, potential need of inferior vena cava resection and reconstruction, and ex vivo tumor resection. A surgical oncologist should be familiar with these techniques and involve corresponding subspecialty experts in case additional assistance is needed during resection. 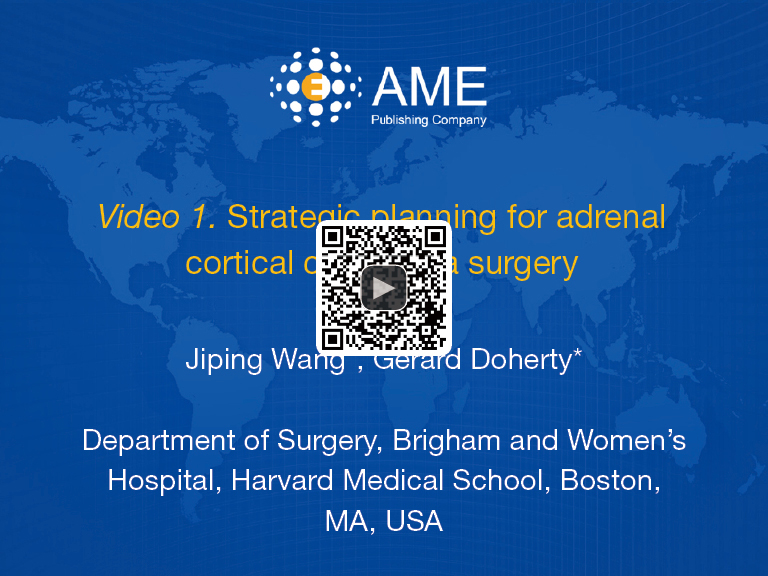